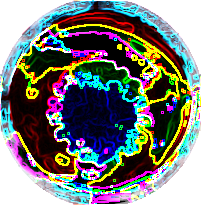 The following text is not published by an authority in virology, it results from a series of thoughts on the distribution of the coronavirus SARS-CoV-2 in the body as being able to be caused by the passage of part of the virions in blood circulation during the destruction of infected lung epithelial cells.
Cet article existe en français

1) SARS-CoV-2 is introduced inside an epithelial cell of the pulmonary alveoli. The cell is solicited (self-solicited?) To reproduce the RNA of the virus, to use its organelles (Golgi apparatus, mitochondria…) and to manufacture the spare parts necessary for the construction of virions; these operations are repetitive so as to replicate the virus in multiple copies. When the cell has exhausted its resources and after one or more releases of virions, what becomes of the cell? When it « dies« , it detaches from the epithelium, it is evacuated by the mucus.

2) The exchanges between the blood and the alveolar air are made by epithelial cells called pneumocytes of type I. These cells have the particularity of having a part of their membrane common with the membrane of the cells which line the blood capillary. If a type I pneumocyte disintegrates, the basement membrane is torn over a large surface (the surface of this type of cell is approximately 400 µm² per cell) and it is closed by a type II pneumocyte which transforms by flattening but nevertheless being inactive with regard to gas exchanges. In the time interval before this scar repair, there is a solution of continuity of the blood endothelium conducive to the start of an aggregation of platelets.

3) Following the vascular endothelial rupture, the platelets form a thrombus by clumping together, encasing white and red blood cells. Due to the small diameter of the blood capillary (around 10 µm), it is easily clogged by the thrombus.

4) The obstruction of the blood capillary has repercussions on the other epithelial cells of the pulmonary alveoli which are connected to this vessel, both upstream and downstream, due to stasis or congestion. They also disintegrate even if they have not been infected with SARS-CoV-2.

A) The virus is inside the cell to be replicated. Question: can several SARS-CoV-2 enter the same cell?
a) If yes, how is the differentiation of the viral RNAs to be replicated at the same time as well as the generation of the elements necessary for the reconstruction of the virions?
b) If not: studying how an infected cell refuses the penetration of another virus could lead to a possible barrier treatment against the virus.

B) When there is a release of virions, these come out by piercing the cell membrane; is there a tropism which systematically attracts virions to the pulmonary alveoli? If not, can virions spill into the blood capillary and spread throughout the body, especially attacking other endothelial cells causing a new mass of platelets? From the moment that virions are taken into the blood stream, they can also migrate to all organs including the nervous centers and be excreted via the urine or faeces.

C) It would be advantageous to better understand the final phase of a SARS-CoV-2 infection contributing to the death of the patient, to know the relationship between the number of lung cells directly destroyed by the intrusion of this virus and the number of cells lungs destroyed by congestion of blood capillaries. This knowledge would be clarified during autopsies supplemented by samples to perform histological examinations of the pulmonary capillaries in search of thrombi and searches for viral presence in the organs. Research could be done on blood vessels to find damage to other endothelial tissue.

D) A study would also be of great interest: what proportion of patients who died from Covid-19 who were on anticoagulants (blood thinners) compared to the national percentage of patients on the same medication, perhaps broken down by age group?

The Lancet : Endothelial cell infection and endotheliitis in COVID-19

I’m not a doctor, neither is Pasteur!